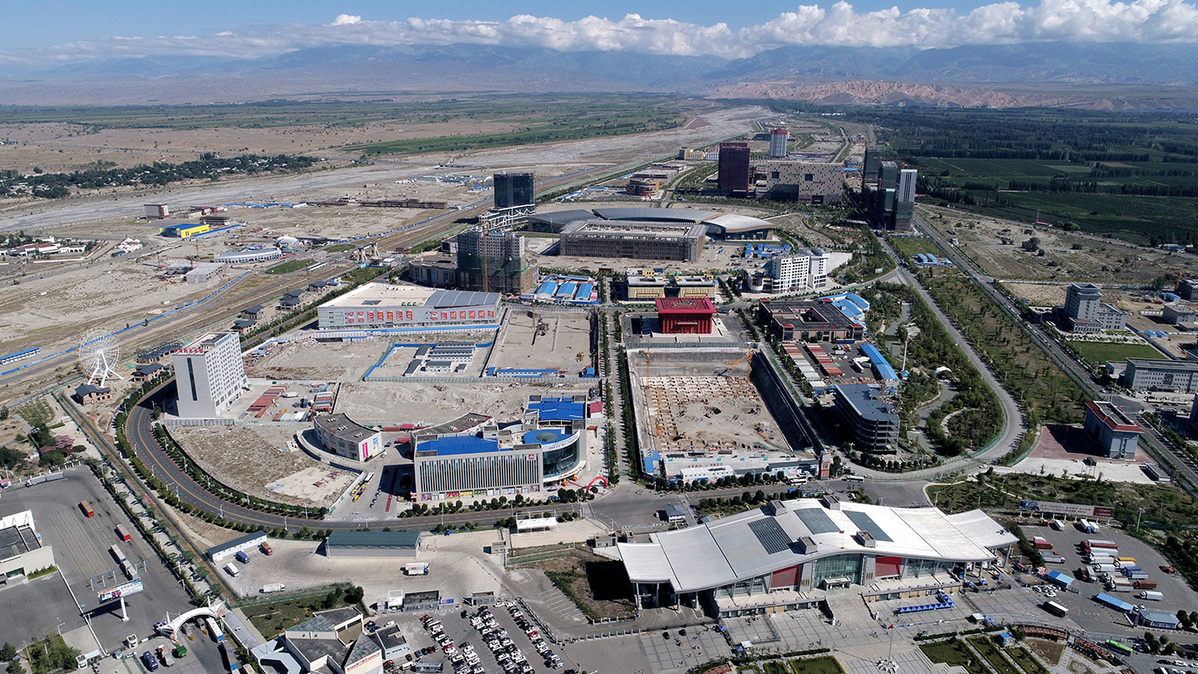 Editor's note: As the People's Republic of China prepares to celebrate its 70th anniversary on Oct 1, China Daily is featuring a series of stories on the role regions have played in the country's development and where they are today.

The Xinjiang Uygur autonomous region, which covers one-sixth of China's territory and borders eight countries, was a key link on the ancient Silk Road. Many ancient kingdoms thrived because of the famous trade route connecting China, Central Asia and Europe.

Nowadays, the wealth generated by the Silk Road is being replicated by the Belt and Road Initiative, which is bringing financial rewards to workers and businesses along its routes.

The dramatic transformation of the land port of Horgos, Ili Kazak autonomous prefecture, which has grown out of the Gobi Desert in only five years, is one of the great success stories of the BRI.

Yu Chengzhong, CEO of Jinyi International Trade which exports fruit and vegetables from China to Kazakhstan, Uzbekistan, Tajikistan and Russia, has reaped the rewards of the new Silk Road. He is known locally as the "fruit king".

"The fruit sourced from Ili can arrive at the market in Almaty, Kazakhstan, via Horgos within six and a half hours. This is the perfect example of how the initiative has taken effect," he said.

Yu first heard about Horgos, which is 300 kilometers from Almaty, when he was wholesaling fruit to Kazakh buyers at a market in Yining in 1999. He then formulated the idea of relocating his business to the border town.

In Mongolian, Horgos means "Where the camel train passes" and in Kazak it translates to "the land of wealth".

Yu said his first impression of Horgos when he arrived in 2000 was of an underdeveloped outpost in the middle of the desert. "Besides a few one-story buildings and small shops, there was nothing but Gobi Desert in Horgos, which was only a land port," he recalled. 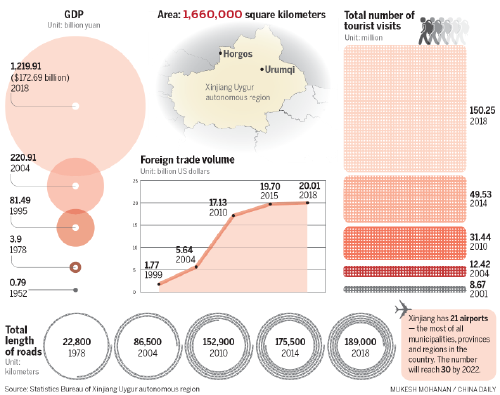 The BRI was proposed by President Xi Jinping during his visit to Kazakhstan in 2013. Yu has witnessed that blueprint become a reality.

"When I first arrived at Horgos it took at least two days for customs to clear the goods heading to Kazakhstan," he said. "Now it only takes two hours thanks to the improved customs clearance and simplified procedures brought by the initiative. Time means money in the fruit business."

When Yu founded the company in 2010, its trade volume was $30 million. Last year it reached $260 million. "The BRI is a golden opportunity for businessmen and Xinjiang," he said.

Yu also witnessed the rapid development of Horgos, especially when the State Council decided to transform it from a simple land port into a city on June 26, 2014, to better accommodate its development under the BRI to benefit the economic development of Xinjiang.

"New roads and buildings have been constructed," Yu said. "The young city on the new Silk Road has gradually taken shape in front of my eyes. It's a surreal experience." 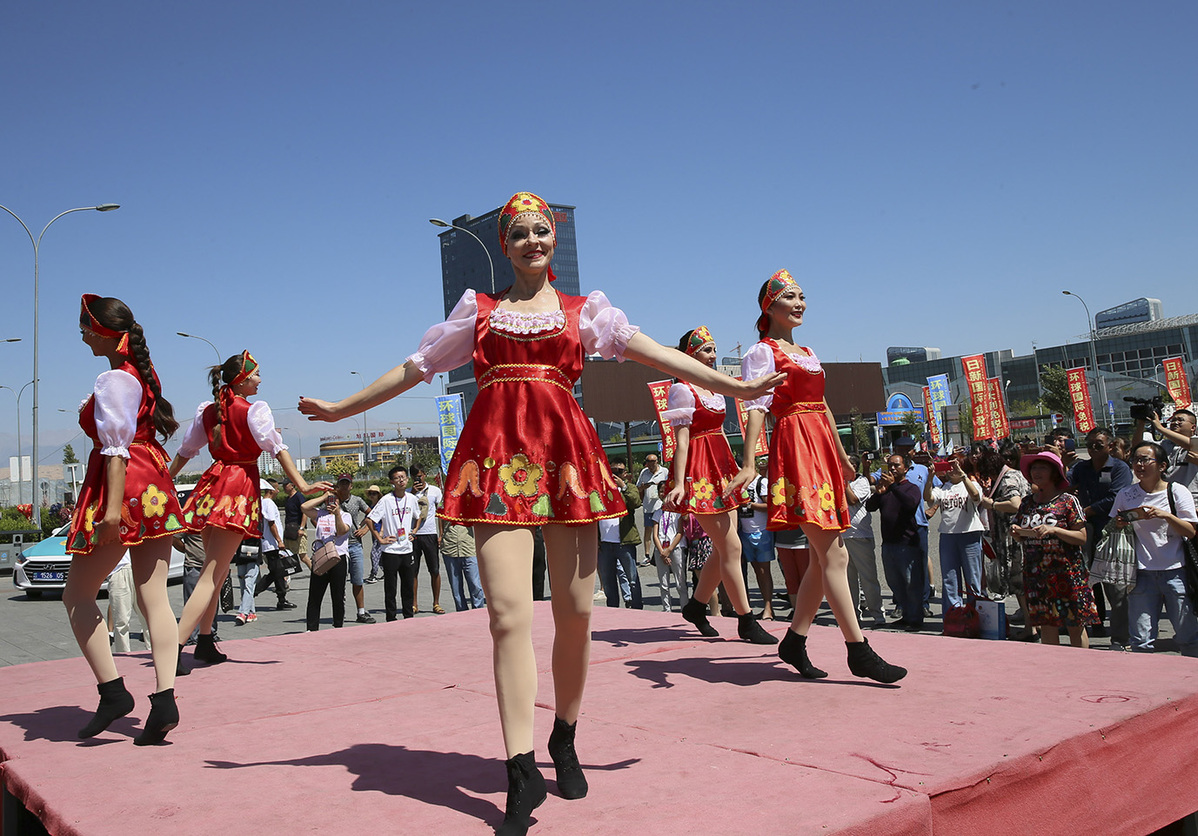 Artists from Russia perform for visitors in a square at the Horgos International Border Cooperation Center. (Xinhua)

To further boost trade and facilitate the customs clearance process, Horgos moved its land port to a new location.

The new land port is a key part of the 8,445 km transcontinental expressway linking Lianyungang in Jiangsu province to St. Petersburg in Russia.

The expressway opened on Sept 27 last year, along with the new Horgos land port, which can clear four container trucks simultaneously, instead of one at the old facility.

Since the expressway opened, the transportation time from Horgos to Almaty has been cut from 8.5 hours to 4.5 hours. The cost of transportation over the same route was slashed from $2,000 per container truck to $1,300, Yu said.

Intermediaries such as Jiudinglong Logistic at Horgos are also enjoying booming business due to the large volume of goods being moved.

Its parking area is packed with container trucks with Kazakhstan license plates waiting for their cargo to arrive. The company holds goods that are then loaded onto trucks and transported to Central Asian countries and Russia via the new expressway.

He said business was so good they are building a new holding facility near the land port.

"It was pretty obvious that the goods and trucks requiring our services surged after the Belt and Road Initiative was introduced," he said. "Also, it's very interesting to see that the volume of goods heading to certain Central Asian countries suddenly increases shortly after President Xi Jinping's visits to those countries."

Xia and his family moved to Horgos two years ago.

"The city's development was fast-tracked because of the initiative, and I am confident in its future," Xia said.

Thanks to the performances of 19 land ports around the region, the foreign trade volume in Xinjiang experienced healthy growth of 10.7 percent year-on-year during the first half of the year. The growth was 6.8 percentage points above the national rate over the same period, according to the General Administration of Customs.

Zhang Chunlin, standing vice-chairman of the regional government, said, "Xinjiang will develop an economic belt along the port areas so we can fully support further opening-up under the Belt and Road Initiative."

Agricultural products have become important items in Xinjiang's foreign trade. The region imported and exported 2.47 billion yuan ($350 million) of agricultural products during the first six months of this year, up 30.1 percent year-on-year, the customs administration added. 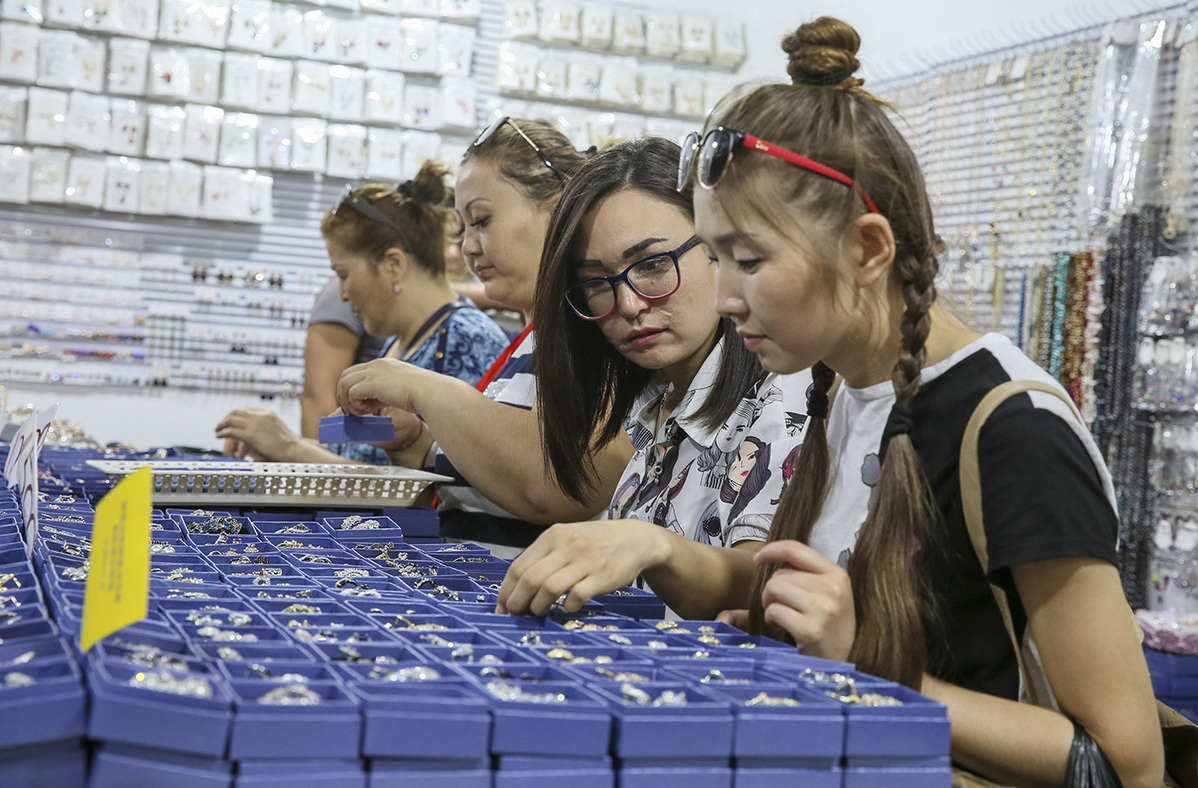 Visitors shop at one of many markets in the Horgos International Border Cooperation Center. (Xinhua)

NOW, MORE THAN EVER

China's trade war with the United States has made people realize the trade route linking China, Central Asia and Europe is more important than ever, said Lyu Xinjing, manager of Horgos Jinhe Biotechnology.

Established in 2016, the company imports soybeans from Kazakhstan and processes them into the basic materials used in the manufacturing of antibiotics.

"We chose to come to Horgos because of its geographical location and the preferential tax policies for enterprises. More importantly, we've seen the potential of the Belt and Road Initiative and Central Asian markets," Lyu said.

On July 25, the General Administration of Customs lifted restrictions on importers and allowed soybeans sourced from all areas of Russia to enter the Chinese market.

"Strengthening agricultural cooperation with Central Asian countries and Russia will be increasingly important for China," Lyu said. "It will also bring new opportunities for businesses."

Traders and businesspeople on both sides of the board are also taking advantage of a unique free trade zone.

On a recent Tuesday morning, people formed a long line outside the security inspection area of the Horgos International Border Cooperation Center, which covers a massive 5-square-kilometer area and is filled with markets.

Straddling the China-Kazakhstan border, the center claims to be the world's only cross-border free trade zone. It allows unrestricted movement of personnel, vehicles and goods from the two countries. Visitors don't need visas, and pay little or no tax.

Shi Ning, 32, was one of the first businessmen to use the center when it opened in 2012. He sells goods to Kazakh tradesmen and now has three markets in the center after starting with one.

Shi said he and his partners had also taken advantage of the exploding cross-border trade to build a hotel for visiting businessmen from Kazakhstan, Kyrgyzstan and Uzbekistan.

"Many of them choose to stay at the center longer than before as there are more markets and goods for them to choose from," Shi said in the hotel lobby.

He said he will bring more high-end Chinese products such as cellphones to sell in his markets as they are becoming increasingly popular with Central Asian buyers.

Meanwhile, Yu, the "fruit king", has his eyes set on importing fruit from Central Asia to Chinese markets. Cheaper transportation and efficient customs clearance along the Silk Road Economic Belt have made this possible.

A container truck carrying melons from Kyrgyzstan arrived recently at Yu's company in Horgos, the first time he had imported rather than exported fruit.

"It only took 12 hours for the melons to arrive at Horgos. The trial was a success," Yu said.

"I will bring more quality fruit from Central Asia, and even Europe, to Chinese markets via the new Silk Road in the future."